SAN JOSE, Calif., March 22, 2019 /PRNewswire/ -- Vector, the space access company, today announced its GalacticSky division, which has been in stealth mode since 2016. Led by veterans from VMWare and Citrix, as well as satellite innovators, GalacticSky has achieved a major milestone on its path to launch its first GalacticSky software-defined satellite, GSky-1. GSky-1 successfully completed integration at the University of Southern California's Space Engineering Research Center (SERC) at the Information Sciences Institute (ISI) and will validate GalacticSky's mission to enable innovators to easily and effectively deploy space application technology in space. 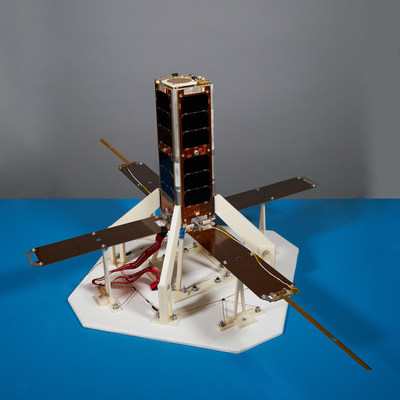 Developed in its Silicon Valley office, and utilizing Vector's patented software-defined satellite technology, developers will no longer be required to build and pay for their own satellites. Instead, they can create an application and host it on an existing satellite or across an ad-hoc constellation made up of satellites all within the GalacticSky ecosystem. GalacticSky will provide future digital innovators the autonomy to develop and test applications in space.

"GalacticSky was created with the goal to bring the promise of space-based technologies to a much larger pool of entrepreneurs who don't need to be space experts to build and deploy their ideas," said Shaun Coleman, co-founder, chief sales and marketing officer at Vector & SVP/GM GalacticSky. "By creating a space-grade cloud computing platform in space, GalacticSky ultimately fulfils Vector's mission of extending access to space and the team at USC is a great partner to support us in our endeavor."

Led by Professor David Barnhart, former DARPA program manager, USC astronautical engineering research professor and director of SERC, the primary mission of this microsatellite is to serve as an on-orbit testbed for GalacticSky and three advanced technology payloads. Following its launch, the satellite will be controlled remotely by Vector and monitored by the SERC research team from a ground antenna at the USC campus and from SERC in Marina del Rey. The primary mission is scheduled to be completed within 90 days once launched, but the satellite will continue to operate and provide system performance data for several years.

GSky-1 hosts the following advanced technology payloads for NASA and the Air Force Research Laboratory (AFRL) that will provide independent data to characterize the harsh environment and operational performance of GalacticSky:

"There is no substitute for operating in space and to that end our challenge was to get GalacticSky on orbit as soon as possible. Working with USC's SERC team at ISI was a natural fit since they had a mission proven satellite in need of a payload, and GalacticSky needed a satellite to integrate with," said Dr. Darren Garber, president of Vector Government Systems. "The integrated Vector and SERC team successfully delivered GSky-1 on time and on budget within six months. Now GalacticSky is ready to meet our users' needs, and with SERC, we're able to move as fast as our customers."

Through GalacticSky, Vector is adding a smart cloud-based layer to microsatellites, creating a truly software-defined-satellite, allowing satellites to dynamically change their missions on orbit as well as provide innovators a cost-effective way to deploy technology in space without the need to build a satellite. GalacticSky utilizes modern datacenter computing in space and a virtualization hypervisor powered by Citrix® to maximize memory, on-board processing, and network bandwidth. With these features, data can now undergo significant processing and analysis in space thus providing key information to users, saving time, bandwidth, and money. To learn more about Vector's GalacticSky platform, please visit: https://www.vector-launch.com

About Vector
Vector is connecting commercial organizations, governments, and space innovators with an anywhere, anytime launch service and space-grade cloud-computing platform, GalacticSky. With the goal of extending access to space and transforming the space economy, Vector's unique remote launch technology disrupts the current status quo of launch frequency from fewer than 20 launches per year to hundreds. GalacticSky further transforms the space segment from its current hardware centric state to a simpler software development proposition with software-defined satellites. Utilizing virtualization software, Vector will have the ability to extend satellite capabilities by processing and computing data in space. Vector is proud to design, build and launch its vehicles and enabling platforms in the United States of America. For more information, please visit http://www.vector-launch.com